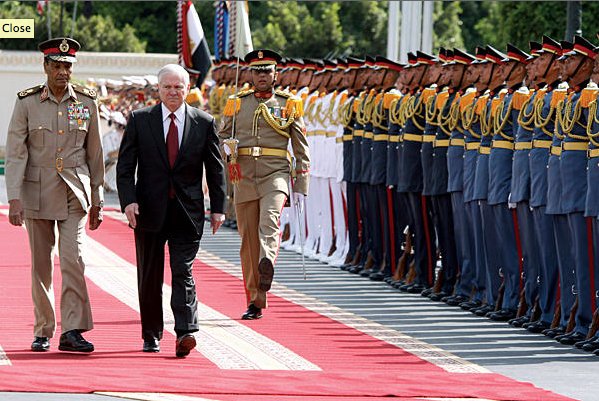 WASHINGTON, DC – Each September, 130 troops from more than 90 countries begin nine months of military instruction at the US Army Command and General Staff College in Fort Leavenworth, Kan. They make field trips to economically blighted neighborhoods and to the Truman Presidential Library, to learn about the integration of the American military.

“What we’re trying to get them to see from the outset is openness, accepting responsibility for government or institutional errors of the past,” says Jim Fain, director of CGSC’s international military student division. This training of foreign officers makes up an important portion of the military ASSISTANCE the Pentagon extends to American allies.

Yet this assistance is now under close scrutiny as US-trained militaries have been used by some of those allies to try to suppress democratic uprisings by their people.

Given that unpleasant reality, plus the fact that the Pentagon spends billions of dollars a year in foreign military aid, both the public and defense analysts are asking anew: What can the American military reasonably expect for giving such support?

“We have to look at whether [US military aid] even succeeds in giving us benefits,” says Christopher Preble, author of “The Power Problem: How American Military Dominance Makes Us Less Safe, Less Prosperous, and Less Free.” Less ambiguous, he adds, are the costs: “what we have paid – in tangible dollars, and in terms of our values.”

The Pentagon, not surprisingly, hopes for a big return on its investment: a bulwark against communism during the cold war, for example, and against terrorist extremists after 9/11. The hard truth is that such aid is, at best, a lever that can be used to try to push a strategic ally – say, Pakistan, Turkey, Egypt, or Yemen – to take greater account of US wishes than it might otherwise, many defense analysts say. And it doesn’t always work, they caution.

“The expectation has always been that countries that receive US military aid and training will be bulwarks of stability and will further US interests in a particular country or region,” says Ted Galen Carpenter, vice president for foreign-policy studies at the libertarian CATO Institute. “Those expectations have often proved excessive.”

If military aid buys less influence than the Pentagon imagines, it can still have value. During the recent uprising in Egypt, Pentagon leaders urged their Egyptian counterparts to exercise restraint against protesters – and they did (though perhaps for reasons of their own). Moreover, US law requires that aid be cut off if the recipient nation is using it to commit human rights violations – another leverage point.

“When you have personal relationships with very senior officers, at times of crisis it gives you an ability to communicate easily,” says Joseph Englehardt, a retired US Army colonel who served as US defense attaché in Cairo and Tehran in the 1970s.

Gen. James Mattis, head of the command responsible for the Pentagon’s operations in the Middle East, emphasized this point in testimony before the Senate Armed Services Committee Wednesday, noting that exchange programs, such as those at Fort Leavenworth, provide the US military common cultural touchstones–with Egyptian military officers who have completed these programs, for example–that are strategically important to the Pentagon. He attributed the ethical behavior of the Egyptian military to the time they spent in US military war colleges. He added in his testimony that “it is worth looking into” expanding such programs.

Still, there’s no guarantee that billions in US military aid will count with a foreign government when push comes to shove.

Take, for example, the Iranian military, which received Pentagon training and weapons in the years leading up to the 1979 revolution.

“The hope was that the Iranian military was going to be part of our defenses against the Soviet Union,” says Mr. Englehardt.

When US-backed Shah Mohammad Reza Pahlavi was deposed, “people in the US military wanted the Iranian military to step in to support the shah, or to replace him and prevent more radical elements from taking over,” adds CATO’s Mr. Carpenter. The Pentagon discovered that its influence was “very limited – surprisingly limited.”

The conventional wisdom, that US military aid could forge an influential client-patron relationship, was often mistaken, even at the height of the cold war, say analysts. Yet the idea continued to hold sway in the months after the 9/11 attacks, when the US military expected Turkey to back its invasion of Iraq and its plan to open a northern Iraqi front on the Turkish border.

“Even though America had poured a lot of money into the [Turkish] military and forged relationships with the officer corps, 90 percent of Turkey’s civilians were opposed to the policy,” says Carpenter, “and the government wasn’t about to do Washington’s bidding.”

American national interests, moreover, often diverge widely from those of the militaries the US supports. The US has different goals in, say, Pakistan than does the Pakistani military.

“So we are essentially not on the same page,” says Dr. Ottaway. “The same relationship is based on different assumptions and different interests.”

This is also the case in Yemen, where the US supports a regime that portrays itself as a bulwark against Al Qaeda-backed terrorist extremists. “Everybody knows that the regime is a disaster, but where are you going to turn – who else is going to help us fight Al Qaeda in Yemen?” says Ottaway.

Many nations getting aid perceive, too, that the US has few options but to back them. “So why make concessions to the US?” she asks. “That’s why, time after time, we discover that the United States actually has very little leverage in these countries.”

“On the one hand, it gives us the ability to influence how these governments are thinking,” he says. “On the other hand, it reinforces the notion that local leaders are nothing but a client state for the US.”

In the short term, Dr. Swift adds, “there seems to be a strategic imperative” to provide aid. In the case of Bahrain, home to the US Navy’s Fifth Fleet, American strategic interests require countering Iranian influence in the region. “The question is to what extent our need to take care of the urgent undermines our ability to deal with the important” – such as US credibility in the region, he asks.

This came into sharp relief when the Bahraini military cracked down on pro-democracy protesters last month, killing at least four people. Just two months earlier, Secretary of State Hillary Rodham Clinton had declared herself “very impressed by the progress that Bahrain is making on all fronts – economically, politically, socially.”

Much of US aid is predicated on worst-case scenarios that likely would not have happened anyway, argues Dr. Preble. “We did not have an Egypt-Israeli war, true. But what was the likelihood it would have happened if we hadn’t supported [former President Hosni] Mubarak? Maybe not zero, but very low, because [former Egyptian President Anwar] Sadat on his own terms had decided that being in a constant state of war was really bad for Egypt.”

Back in Fort Leavenworth, the Army’s Mr. Fain argues that Pentagon aid gives the US military vital influence abroad. “If you just base your assessment on the behavior of the Egyptian Army,… the restraint and professionalism that’s being demonstrated by their military is based on something,” he says. “I have to believe that their behavior is somewhat informed by their experiences here.”

Adds Englehardt: “Military training is more than training someone to operate a piece of military equipment.” When foreign soldiers come to the US, they “get involved and exposed to the whole lifestyle,” he says, “the whole set of American ideals.”