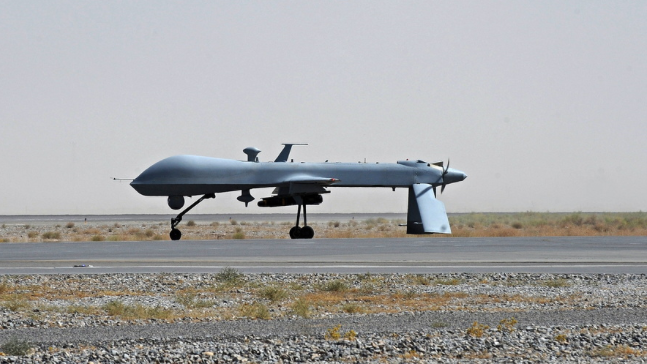 playpause
U.S. Drones Navigate Murky Legal Path in Pakistan – /
Update RequiredTo play the media you will need to either update your browser to a recent version or update your Flash plugin.

The U.S. has been carrying out drone strikes in Pakistan for some eight years, but it’s done so under a policy that has emerged piecemeal over that time.

“It started in 2004, when drones were really an oddity,” says Daniel Markey, a senior fellow at the Council on Foreign Relations. He was on the State Department’s policy planning staff when it all started during the Bush administration.

“The first drone attack by the United States was not admitted to by the U.S. government,” Markey says, “and the Pakistani government at the time, run by Gen. [Pervez] Musharraf, took responsibility for that attack and claimed that it was not a drone, but that in fact was a Pakistani strike.”

Musharraf was Pakistan’s president at the time. The ruse worked when drone strikes were few and far between. But then, Markey says, “this kind of charade started to unravel.”

“And as that unraveling became more painful for the Pakistanis, they changed their tune,” he says. “And instead of taking credit, they started to complain about them publicly — while privately endorsing them.”

U.S. officials say that from 2009 until about six months ago, there was consent from the Pakistanis for what the Defense Department calls a “foreign internal defense mission.” Christopher Swift, a fellow at the University of Virginia Law School, used to track terrorism financing for the Treasury Department.

“In international law, it is not illegal for a country to go into another country if they are invited,” Swift says. “The best way to think about it is if you are having a fire in your house and the neighbor comes to help you put out the fire — that neighbor isn’t trespassing if you’ve invited them.”

In other words, the U.S. was helping Pakistan fight its fires: al-Qaida and its associated groups, individuals who threatened both the U.S. and Pakistan.

The way it used to work is that the U.S. would send target sets to Islamabad and the Pakistanis would respond, sometimes offering more information. It was collaborative.

But that started to change after the raid that killed Osama bin Laden. Now, when U.S. officials send targeting information, the Pakistanis merely acknowledge it, without the back and forth.

“The conclusion now seems to be that it is still possible to construe what Pakistan is doing as providing tacit consent,” says Ashley Deeks, a former State Department lawyer. Now she’s an associate professor at University of Virginia Law School.

“But you can imagine Pakistan taking one of a number of steps from here on that unwinds that tacit consent even further,” she says.

For example, it could raise a diplomatic objection, like a formal complaint at the United Nations. Or it could stop clearing air space, something it does now. It could also just shoot down the drone — drones are slow.

But Pakistan hasn’t done any of those things. And even if Pakistan objected more formally, it probably wouldn’t end the drone attacks because there is another legal theory at work.

This theory basically says that because the U.S. is targeting groups in Pakistan linked to the Sept. 11, 2001, terrorist attacks and the war in Afghanistan, the U.S. claims the right to target them. Even without consent.

The argument leaves Pakistan without much say in the matter.