The War in Afghanistan

Home / The War in Afghanistan 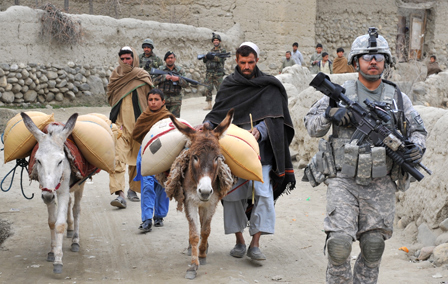 JONATHAN MANN, CNN HOST: Afghanistan’s police have not been the country’s proudest achievement. Even as the government trains new officers, it announced plans to replace more than 80 precinct and department commanders, including the Kabul chief of police. Afghanistan’s army is not the only security force that cannot stand on its own. There is also the internationally trained police.

Welcome back. The government of President Hamid Karzai has never been able to extent its authority over the entirety of Afghanistan, but last month’s riot in Kabul suggested its authority is fragile even in its own capital.

Joining us now to talk about the government and its growing challenges is Christopher Swift at the Center for International Studies at the University of Cambridge. Thanks so much for being with us.

CHRISTOPHER SWIFT, CENTER FOR INTL. STUDIES: I would say that it’s absolutely essential. Absent a U.S. coalition and NATO assistance, particularly in the southern and central provinces proximate to the Durand Line, the Kabul government would not be able to maintain even the semblance of effective territorial control in many of those regions.

MANN: So, not even just speaking of the south. Speaking nationwide, if foreign forces were withdrawn from the country, how much of the country would the Kabul government control and how long would it control it for?

SWIFT: Well, that would depend on the nature of the government in Kabul following that withdrawal. I think if you were to see a sudden and precipitous withdrawal of international forces from Afghanistan, you would very quickly see the situation devolve into something not terribly different from what we had prior to the United States intervention there in 2001, which is to say a coalition in the north made up of predominantly Tajik and Uzbek warlords and competition among moderate and more religious Pashtun tribes in the south.

Essentially, you’d see a repeat of the Afghan civil war. A lot of the tensions that we see in Afghanistan now and a lot of the complexities that the Karzai government face arise from unresolved issues from the past decade.

MANN: And even four and a half years after Hamid Karzai essentially took over, his government would collapse without foreigners?

SWIFT: Well, that possibility is quite strong. There is a fair amount of competition within Karzai’s Pashtun base, both between folks in the southern region who are more moderate and the Taliban, but also between the various dominant Pashtun tribes that compete for territory and compete for influence and patronage throughout the southern arc of Afghanistan.

So, unless Karzai was ale to maintain a good coalition among his own ethnic group or perhaps develop better ties with some of the ethnic groups to the north, we would likely see over time, probably in the space of a year to 18 months, a devolution back towards the situation we saw in the Afghan civil war in the late 1990s.

MANN: Now, how much of this is just a given? Anybody who runs Afghanistan is going to be inheriting a society that is deeply divided by ethnic group. How much of it is a measure of Hamid Karzai’s successes or failures as a leader?

SWIFT: Well, I think it’s unfair to be overly critical of Hamid Karzai. Here you have an individual who has been long committed to developing his country both politically and economically, who was placed in a very, very difficult situation immediately following the fall of te Taliban in 2001, and who has been trying to navigate these murky waters of ethnic and tribal politics in Afghanistan at a time when the international community, the United States, the United Kingdom and others have made great promises but have failed to deliver, especially with respect to economic development and with respect to local security.

MANN: Now, you’re being very nuanced and understanding. What about the people of Afghanistan?

SWIFT: Well, with the people of Afghanistan, I think you’re seeing growing frustration. A great American poet once said a dream deferred eventually explodes, and I think you are seeing the continual deference of a dream in Afghanistan, a dream of stability, of economic prosperity. There are thousands and thousands of farmers who fled their family land during the Soviet Afghan war over 20 years ago who have dreamed of buying that land back and going back to their villages and working for themselves, and a lot of these people have been caught up with the opium trade and with poppy cultivation. A lot of these people have been caught up under essentially sharecropping for local warlords and others, whom the United States and the international community and, to a certain extent the Karzai government, depend upon in order to turn back the Taliban and other radical elements.

MANN: How much time does the government have? How much pressure is it under to start showing results?

SWIFT: That depends on the effectiveness of the new approach the NATO coalition will be taking in the south over the space of the next six to nine months.

I think that NATO’s decision to double the amount of troops that they’re sending down to the Durand Line is a step in the right direction. I also think that as the operations tempos, the Taliban operation’s tempo, starts to increase, people in the West will stop believing their own press and start looking at what’s happening on the ground, village by village by village.

You have a situation where the Taliban is moving from symbolic acts of terror, like bombings and assassinations, to outward manifestations of effective territorial control. They’re trying to govern in some of these districts. And in some of these districts and provinces, it is virtually impossible for Karzai appointees and folks who would otherwise be loyal to the center Afghan government to do much of anything when their choice is between the Taliban and the local warlord who provides absolutely no security for the people and is in many instances using foreign sponsorship to enrich themselves.

The Taliban don’t simply want to make trouble or commit acts of terror. They want to govern Afghanistan. And that was their goal from the very beginning.

MANN: And that presumably is a good distance away.

SWIFT: That is a good, good distance away, because you have to remember that the Pashtun only represent 40 percent of the population of Afghanistan. The Taliban represent a minority within that group, a very extreme minority, and you have these three other major ethnic groups, the Hazara, the Tajik and the Uzbeks in the north and central regions, who would violently resist any attempt by the Taliban to establish control of Afghanistan.

MANN: Christopher Swift, of the Center for International Studies, University of Cambridge, thanks so much for talking with us.

SWIFT: A pleasure to be with you.

MANN: We take a break. When we come back, the competing powers in Kabul itself. Warlords, drug lords and lawmakers, all in parliament. Stay with us.