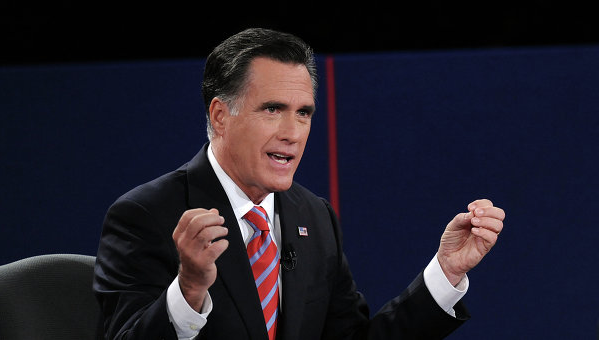 WASHINGTON – Republican presidential candidate Mitt Romney has promised to bring a coherent Middle East policy to the White House should he win next month’s election. He may want to bone up on the geography of the region first.

During his presidential debate Monday evening with Democratic incumbent Barack Obama, Romney described Syria as Iran’s “route to the sea,” giving short shrift to Iran’s southern coastline, which runs more than 1,500 miles (2,400 kilometers) along the Persian Gulf and the Gulf of Oman—longer than the Pacific coast of the continental United States.

Furthermore, Iran’s western border lies some 500 miles away from Syria’s only coastline: 112 miles (180 kilometers) of shoreline along the Mediterranean Sea. To get there, Iranians must cross the territory of NATO member Turkey or neighboring Iraq—or pass through the Suez Canal.

“I don’t think [Romney] paid much attention during geography class or history class,” said John Limbert, a former US Deputy Assistant Secretary of State for Iran under the Obama administration who resigned in 2010 over lack of progress on rapprochement with Tehran.

The Romney campaign issued a clarification of Romney’s comment to The Washington Post following Monday’s debate, which was focused on foreign policy and featured discussions of Iran’s nuclear ambitions and the raging civil war in Syria.

“It is generally recognized that Syria offers Iran strategic basing/staging access to the Mediterranean as well as to terrorist proxies in the Levant,” the Romney campaign told the newspaper, referring to a geographical area along the Eastern Mediterranean. “This is a large reason why Iran invests so much in Syria.”

It was not the first time that Romney described Syria as Iran’s “route to the sea.” He made the same claim during a Republican primary debate in Arizona last February.

Syria’s ports at Latakia and Tartous on the Mediterranean give Tehran reach it might not otherwise have, but Iran’s navy is almost exclusively focused “right in its front yard” in the Persian Gulf, said Christopher Swift, an adjunct professor of National Security Studies at Georgetown University.

“The idea that these are staging areas for significant Iranian maritime power is exaggeration bordering on error,” said Swift, a fellow at the University of Virginia Law School’s Center for National Security Law.

Michael Rubin, a former staff advisor on Iraq and Iran with the office of the US Secretary of Defense, downplayed the significance of the gaffe, saying it paled in comparison to US President Gerald Ford’s statement in at 1976 debate that there was “no Soviet dominance of Eastern Europe.”
“Someone in the campaign should have their wrists slapped because of it, but this is not the type of thing that debates turn on,” said Rubin, a resident scholar at the conservative American Enterprise Institute.
Romney’s overall point was correct, Rubin added.

“Syria is an Iranian ally, and if Iran lost its grasp on Syria, that would be a good thing from an American standpoint,” he said.