Drone strikes a scandal… or just a sideshow?

Home / Drone strikes a scandal… or just a sideshow? 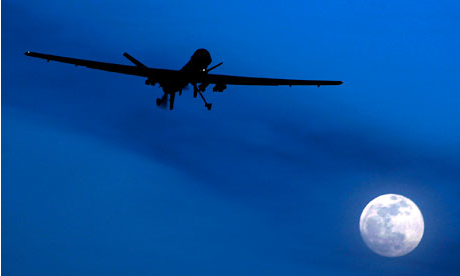 The Guardian
By Jenny Holland

Peace activists and human rights groups have been vocal in their condemnation of the US policy of drone strikes against militant targets in Pakistan and Yemen.

The narrative often repeated by these groups is that drones are loathed in both countries, and are driving the population into the arms of militants. But the reality on the ground is much more complex.

According to Brian Glyn Williams, professor of Islamic history at the University of Massachusetts, Dartmouth, and author of the upcoming book Predators: The CIA’s Drone War on Al Qaeda, many local people in tribal areas support surgical strikes by drones over large-scale ground offensives by the Pakistani army. While public opinion in the rest of the country may be strongly anti-drone, he found, for those Pakistanis living under Taliban rule, it is not so clear-cut: “The local tribes turned on the Taliban for killing hundreds of their maliks (tribal leaders), enforcing strict sharia law, executing ‘spies’, closing schools for girls, carrying out suicide bombings, and generally terrorizing the population.”

What has gone largely unreported is the fact that not only have drones been successful in disrupting terrorist plots and militant networks, but that the number of civilian casualties is actually low. According to the New America Foundation, which tracks data from major news sources in both the west and Pakistan, drone strike accuracy has been steadily increasing – going from a 9% to 10% civilian death rate in 2008 to a 0% civilian death rate in 2012. Two other studies, also working from both Pakistani and western data, came to similar conclusions.

Comparing the threat posed by militants and terrorists – both to Pakistani society and to the west – to the threat posed by drones, Williams is emphatic: “The drones are saving civilians, not killing them.” He cites the failed 2010 plot by British jihadis to carry out a “commando-style” attack on civilian targets in Europe – all of the plotters involved were killed in drone strikes.

And the threat is even greater to the Pakistani public. Those who beat their chest in fury over the small amount of collateral damage rarely speak out against the slaughter of thousands by the Taliban.

The claim that drones are turning locals into militants is also far from proven. In the tribal regions, Williams says, “there are very few undecideds – you are going to tolerate the drones because they go after your enemies, or you are going to be with the Taliban. Drones aren’t going to drive people into the arms of the Taliban”.

A strikingly similar point is made by Christopher Swift, a lawyer and political scientist who conducted 40 interviews with Yemeni tribal leaders and Islamist politicians across the country in June. In Yemen, “drones aren’t the primary driver of al-Qaida recruiting,” Swift says. “Economic desperation, corruption, breakdown of traditional culture, they are driving recruitment.”

“The closer I got to people who are actively fighting al-Qaida in Yemen, the more they wanted the US to maintain its drone programme,” Swift, an adjunct professor of national security studies at Georgetown University, says. Away from the battleground, in cities and in educated circles, people were militantly opposed to drones and saw them as a neocolonial instrument. The closer you are to the problem, says Swift, the more you understand the value of force as a policy instrument.

That proximity to danger can make for some surprising – if wary – allies. Swift recounts meeting a Yemeni member of the Muslim Brotherhood: “his general feeling was very sceptical of US intervention in Yemen and the Middle East as a whole, inclined to see this as part of the clash of civilisations paradigm,” says Swift. “But also as someone who was dealing with al-Qaida and knew how bad they are.” He supported the US drone strikes, “with conditions”, such as no civilian casualties and minimal force.

When it comes to drones, Swift says, we are asking ourselves the wrong questions. Drones have become a free-floating signifier in the US, Europe and the Middle East for all the other debates we are having about security and politics, he argues.

Ultimately, the debate over the drone campaign is a distraction from other, more important issues in Yemen: maternal and child health, access to water, adherence to the rule of law. Drones are a side show.

The problem is not drones per se, but the fact that by using them the US government is applying short-term solutions to long-term problems. Drones may not be driving al-Qaida recruitment, but neither are they bringing peace and stability. That would take sustained reform.