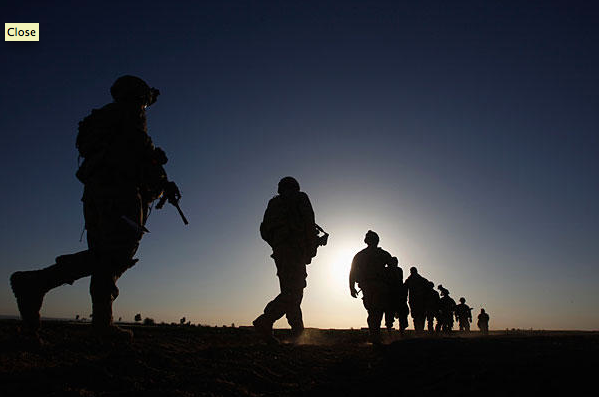 WASHINGTON – Col. Brian Drinkwine had an inkling of trouble even before his 4th brigade of the 82nd Airborne Division left for Afghanistan.

Originally slated to go to Iraq, the brigade received a change in orders: become badly-needed mentors for Afghan security forces. At the time, the brigade was the largest single Army unit ever given the specific mission of training Afghan troops, a mission that senior Pentagon officials acknowledged had too few resources and too little focus.

The troops of the 4th were less than enthusiastic, said Colonel Drinkwine in a June 2009 interview.

“I cannot say there wasn’t some initial disappointment when we learned that’s what we would be doing,” he said, suggesting that his troops were concerned by the notorious corruption in Afghanistan.

He predicted confusion and uncertainty on the battlefield. “When I was young, I had a jeep. You could look under the hood and know what’s going on, how it all works,” he said. The tour for his brigade in the months to come would not be like that, he acknowledged.

Now, the Los Angeles Times has published photos taken in 2010 of members of that brigade posing with the body parts of insurgent bombers who had blown themselves up. The news raises questions about the tensions between the rigors of war for soldiers on multiple deployments and the possible breakdown of leadership within the brigade run by Drinkwine, a former division one hockey goalie at West Point.

Command climate becomes increasingly important in the face of the stress of multiple deployments, as troops of the 4th experienced, says Christopher Swift, fellow at the University of Virginia’s Center for National Security Law. Failures in good order and discipline – such US soldiers posing with enemy body parts – can point to “failure of command responsibility,” Dr. Swift adds, “rather than a fundamental pathology on the part of soldiers.”

Failure of leadership has been a recurring theme among US forces in Afghanistan this year.

• In January, it came to light that Marines – including a squad leader – had urinated on the corpses of dead Taliban fighters, videotaping the incident for posterity.

• This was followed closely by charges of insensitivity and possible leadership failure after US service members burned Qurans, sparking a week of riots and the death of six US troops.

• In March came a shooting rampage by a US soldier that left 17 Afghan civilians dead.

For his part, the soldier who leaked the photographs to the Los Angeles Times said that the callous actions of the soldiers were linked in large part to the horrors of war. He told the Times that virtually all of the soldiers who posed in the photographs had buddies who had been killed or wounded during the deployment. The 4th brigade lost 35 soldiers on their year-long tour and was sent again to Afghanistan to begin another deployment in February.

But he also said the photos represented “a breakdown in leadership and discipline that he believed compromised the safety of the troops.”

Revelations of the photographs had senior defense officials once again promising an investigation “that could lead to disciplinary measures.” Said Pentagon spokesman George Little: “Anyone found responsible for this inhuman conduct will be held accountable in accordance with our military justice system.”

Historically, the US military has chosen not to hold commanders responsible for the actions of “renegade” troops. The trial earlier this year of a Marine charged with crimes for the murder of two dozen Iraqi civilians in Haditha resulted in six Marines who had their cases dropped, and one found not guilty. A low-ranking officer, Capt. Randy Stone, was initially charged with dereliction of duty and violating a lawful order, but these charges, too, were dropped.

In the notorious case of Abu Ghraib, the highest ranking officer to be brought up on charges, Col. Thomas Pappas, was relieved of his command for allowing military dogs to be present during interrogations or Iraqi prisoners. Lt. Col. Steven Jordan was acquitted of all prisoner mistreatment charges. The remainder of those who faced charges were low-ranking enlisted soldiers, who received sentences that ranged from three months of hard labor to 10 years in prison.

Senior US military officials overwhelmingly tend to stress instead that the actions were those of a few bad apples. In the statement released on the heels of this latest scandal, Defense Secretary Leon Panetta did not veer from this approach. “These images by no means represent the values or professionalism of the vast majority of US troops serving in Afghanistan today,” wrote Mr. Little on Secretary Panetta’s behalf.