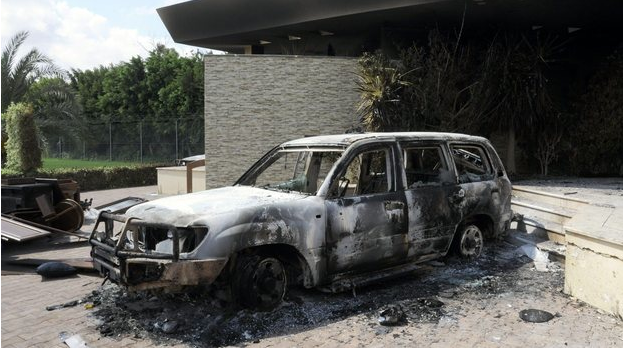 playpause
Benghazi Attack Raises New Questions About Al-Qaida – /
Update RequiredTo play the media you will need to either update your browser to a recent version or update your Flash plugin.

For the past decade, al-Qaida has been a top-down organization.

Letters seized at Osama bin Laden’s compound in Pakistan showed that he was a hands-on manager, approving everything from operations to leadership changes in affiliate groups.

But there’s early intelligence that al-Qaida may have had a small role in the attack on the U.S. Consulate in Benghazi, Libya, which killed four Americans, including Ambassador Chris Stevens, on Sept. 11.

If al-Qaida involvement is confirmed, it may signal that al-Qaida has changed.

The broader investigation is still playing out. The FBI finally visited the consulate this week and was already working with Libyan authorities to find those responsible.

Also, two men believed to be connected to the attack were detained at the airport in Istanbul. U.S. officials say they have an interest in interviewing the two men, but wouldn’t say whether they were significant actors in the attack.

Based on what’s known so far, Bruce Hoffman, a terrorism expert at Georgetown University, thinks the Benghazi attack could signal something significant.

“What we saw in Benghazi was something that was much more atomized, much more disparate and much more opportunistic,” he says. “I think it raises potential challenges for how we go about counterterrorism in the next decade of this new al-Qaida.”

This new al-Qaida, one without bin Laden, has been battered as an organization. But the group may have found a new role: inspiring local militias.

One call in particular is under scrutiny. It came on the afternoon of Sept. 11, shortly after protesters in Egypt had stormed the American Embassy in Cairo; this was about six hours before the attack on the consulate in Benghazi began.

Officials believe al-Qaida told members of the Libyan militia that they should take a cue from the Cairo protests and launch immediately any attack they had been planning for the future.

“You have now almost multiple layers of al-Qaida,” Hoffman says. “You see even the [al-Qaida] affiliates actually interfacing with locals on the ground and taking advantage of their capabilities to deploy them on very short notice.”

Africa appears to be ground zero for al-Qaida to test this new tactic.

Over the past 18 months, Islamists who subscribe to some of al-Qaida’s ideas have appeared in Nigeria, Mali, Mauritania, Niger, and now Libya.

“What we see in Libya right now is a set of individuals who’ve migrated from North Africa to conflict zones like Iraq and Syria are migrating back,” says Christopher Swift, a fellow at the University of Virginia School of Law who used to track terrorist financial networks at the Treasury Department.

“Some of those individuals have drunk the Kool-Aid. They believe in the al-Qaida ideology, but they may not share the same short-term political objectives, and they may be operationally distinct,” Swift says.

In other words, they often agree with al-Qaida, but they have their own agenda.

And what intelligence officials are sorting out after Benghazi is whether a militia like Ansar al-Sharia — the group suspected in the attack — is effectively a local arm of al-Qaida, or something more distinct.

Swift thinks what happened in Libya could be the future of al-Qaida.

“I think you’re also going to see a relocalization process within al-Qaida. What does that mean? It means the future of global jihad is going to be built through local insurgencies,” he says.

That it will make it much harder to prevent attacks, because every local extremist group could provide foot soldiers for al-Qaida.