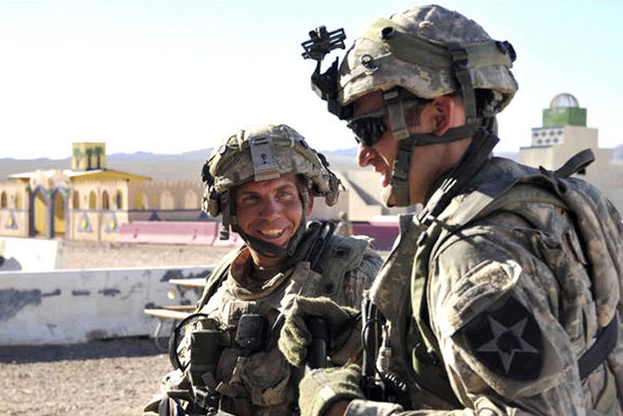 The charges allege that on March 11, Bales murdered Afghans near Belambey, in Panjwai district of Afghanistan’s Kandahar province, the Army said in the statement issued from Kabul. If convicted, the maximum possible punishment under the Uniform Code of Military Justice is the death penalty with a mandatory minimum sentence of imprisonment for life with eligibility for parole, the Army said.

Bales’s victims include nine children, four women and four men, the Army said in an e-mailed response to a query. Four children, one woman and one man were injured, the Army said.

“We are under some very trying circumstances” in Afghanistan, Marine Corps General John Allen, commander of U.S. forces in Afghanistan, said in an interview yesterday when asked about the aftermath of the killings. Afghans “understand these kinds of things happen and are not happy about it.”

And yet Afghans know that the U.S. will hold those who commit crimes responsible for their actions, he said. The Afghan “leadership is confident that we’ll investigate thoroughly, try the case thoroughly and, if required, hold the individual responsible,” Allen said.

In a murder charge, the term premeditated refers to a “consciously conceived” intent to kill, Lieutenant Colonel Jimmie Cummings, an Army spokesman, said in an e-mail.

The Army released a “charge sheet” about the incident that redacted the names of the victims and provided no details about how the shootings unfolded.

The next step in the process is a so-called special court- martial to be convened at Joint Base Lewis-McChord in Washington state, which is the home base for Bales, to begin an investigation under Article 32 of the military law, the Army said. The investigation may determine whether a general court- martial will be convened to try the case, the Army said.

The soldier’s civilian attorney, John Henry Browne, has questioned how much evidence the military has in the case. Browne has also said his client suffered a traumatic brain injury during one of three tours in Iraq and didn’t want to go to Afghanistan, where he was deployed in December.

Bales, a qualified sniper with the 2nd Battalion, 3rd Regiment of the 3rd Stryker Brigade Combat team, was in Afghanistan in support of U.S. Special Operations forces, Defense Department officials have said. He is being held in pretrial confinement at a military prison in Fort Leavenworth, Kansas.

The killings exacerbated tensions between the U.S. and Afghanistan, already at a high level after the burning of Korans last month in a trash dump at the largest U.S. base in Afghanistan. Protests followed across Afghanistan, and six U.S. military personnel were killed by Afghans.

President Barack Obama called Afghan President Hamid Karzai after the shootings of which Bales is accused, pledging “to hold fully accountable anyone responsible.”

A trial may not begin for at least a year, according to Colby Vokey, a retired Marine Corps officer who tried or supervised hundreds of military cases as chief prosecutor and later chief defense counsel at Camp Pendleton, California.

Questioning the evidence in the case, Browne, the Seattle attorney representing Bales, told reporters this week, “If I was the prosecutor, I’d be concerned about how we prove anything.”

Browne also has indicated he may seek a “diminished capacity” defense for his client. He said on March 19 that Bales is “confused” and doesn’t recall some details of the alleged assault.

A mental-health defense may be difficult to win before military jurors, known as court members, according to Christopher Swift, a fellow at the University of Virginia Law School’s Center for National Security Law.

He said that strategy may help avert a death sentence if the military seeks it in the case.

“I see this as a defense that’s aimed at mitigating the ultimate penalty,” Swift said in an interview.