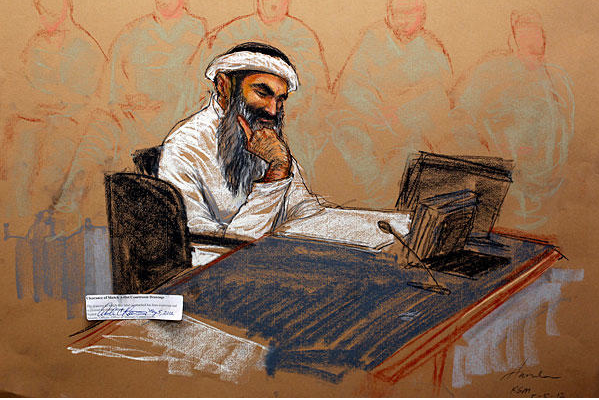 WASHINGTON – Khalid Sheikh Mohammed, the accused mastermind of the Sept. 11, 2001, attacks, will appear before a judge in Guantanamo Bay, Cuba, tomorrow to be arraigned for the second time in a case that will test whether alleged terrorists can get justice before U.S. military tribunals.

After false starts including a proposed civilian trial in a New York federal court, U.S. prosecutors will seek to convict Mohammed and four others of the worst terrorist attack on American soil. At the same time, they’ll try to show that the military tribunal system the Obama administration has established can comply with international standards.

Civil libertarians say the five should be tried in civilian courts that provide greater legal protections, such as excluding evidence tainted by torture.

“A prosecution that ultimately fails to measure up to international standards of justice undermines our credibility in the eyes of the world and plays into the hands of those who want to attack us,” said David Glazier, a law professor at Loyola Law School in Los Angeles who will attend the arraignment as an observer for the University of Virginia law school’s Center for National Security Law.

Tomorrow, the judge, U.S. Army Colonel James Pohl, will ask the five defendants whether they understand the charges against them, want to be represented by lawyers, and are satisfied with the attorneys they now have, said James Connell, a lawyer for Ali Abdul Aziz Ali, a Pakistani who’s one of the five defendants and is accused of helping finance the attacks. A trial may be at least a year away.

Pohl also may hear arguments on various defense requests, Connell said. The defendants are unlikely to enter pleas of guilty or not guilty until later, he said in a telephone interview.

“It could be a short day or a very long day,” Connell said.

There has been no indication whether Mohammed, the self- proclaimed mastermind of the Sept. 11 attacks and allegedly once al-Qaeda’s operations chief, will renew his bid, made during his last court appearance in 2008, to plead guilty and be martyred, saying, “I do not trust the Americans.” Other defendants joined in the request, which Mohammed called his “earnest desire.”

The earlier charges were withdrawn after President Barack Obama sought to move the case to federal court in New York. The administration returned the charges to the military system in 2011 after a political fight over where the men would be tried. The charges were referred to the Guantanamo Bay tribunal last month.

Now, proceedings will begin anew with enhanced legal protections for the defendants, lawyers say. In a glimpse of the many unresolved legal issues, defense lawyers already have filed motions seeking access to their clients without government monitoring and urging that statements the defendants make in court be disseminated publicly and not classified.

“This is the most important terrorism trial of our lifetime, and we’re doing it in a proceeding with significant open questions and issues,” said Zachary Katznelson, a senior staff attorney at the American Civil Liberties Union’s National Security Project. He said the case belongs in civilian courts. The ACLU this week filed a motion asking that accounts of detainee abuse be made public and not remain classified, as the government urges.

Mohammed, who was captured in a 2003 raid in Pakistan, is charged with Aziz Ali, Walid Muhammad Salih Mubarak Bin Attash, Ramzi Binalshibh, and Mustafa Ahmed Adam al-Hawsawi for planning and carrying out attacks on New York and Washington and aboard United Airlines Flight 93, which crashed in Shanksville, Pennsylvania, after passengers fought back against the hijackers. The attacks killed 2,976 people.

The five are charged with conspiring to finance, train and direct the 19 hijackers who seized four airliners used in the attacks that destroyed the World Trade Center and damaged the Pentagon outside Washington. The charges include terrorism, hijacking aircraft, conspiracy, murder in violation of the law of war and attacking civilians.

Two others were tried before commissions and convicted before a 2009 overhaul of the rules: Salam Hamdan, sentenced to 5 1/2 years in prison in 2008 for serving as Osama bin Laden’s driver, and Ali Hamza Ahmad al-Bahlul, who got a life sentence in 2008 for aiding bin Laden. Others such as Australian David Hicks, who trained at al-Qaeda camps in Afghanistan, have pleaded guilty before military tribunals.

Mohammed has said he personally killed Wall Street Journal reporter Daniel Pearl, who was decapitated in Pakistan in 2002. The confession came at a U.S. military hearing at Guantanamo Bay in March 2007. He hasn’t been charged in the Pearl case.

Mohammed was held by the Central Intelligence Agency until 2006, and then sent to Camp Delta, the detention facility at Guantanamo Bay that now holds 169 suspected terrorists.

The CIA has acknowledged that Mohammed was one of three al- Qaeda operatives who were “waterboarded.” He underwent the procedure, which simulates drowning, 183 times, according to government documents. The U.S. has since banned the practice, which critics such as Human Rights Watch call a form of torture.

Even if they’re acquitted, Mohammed and his accused accomplices have no chance of being released from custody, said Christopher Swift, a fellow at the Center for National Security Law. Held as unlawful enemy combatants captured outside the U.S., they may be detained until hostilities involving the U.S. end, he said.

“This is a very unusual trial,” Swift said in a telephone interview. “Most trials offer the prospect that an acquitted individual will be released.”

That’s just one of the unresolved issues that may wind up before the U.S. Supreme Court, he said. Another is the extent to which the prosecutors from the military and the U.S. Justice Department will rely on evidence gathered through torture, said Victor Hansen, a retired Army lawyer who’s now a professor at the New England School of Law in Boston.

Under the Military Commissions Act of 2009, prosecutors are barred from introducing into evidence statements of the accused that were elicited through harsh interrogation methods, Hansen said in a telephone interview.

Still, it’s unclear whether other information gathered through such means, including leads to witnesses or hearsay statements made outside of court by captured al-Qaeda members, will be allowed into evidence.

A conviction based on such evidence could be tarnished, said Morris Davis, who was chief prosecutor for the military commission at Guantanamo Bay from 2005 to 2007. He now teaches at Howard University Law School in Washington.

“You could have the most perfect trial at Guantanamo, and the vast majority of the world is still going to be skeptical,” said Davis, who wants the case tried in civilian courts. “It’s clearly an extraordinarily significant case. It’s disappointing it’s being relegated to a second-rate forum.”

“You can make an overwhelming case against KSM,” Davis said of Mohammed. “There’s tons of other evidence establishing his guilt.”

The tribunal “incorporates all of the fundamental guarantees of fairness and justice that are demanded by our values,” U.S. Army Brigadier General Mark Martins, chief prosecutor at the Office of U.S. Military Commissions in the Defense Department, said on April 3 at the Harvard Law School. “It also far exceeds the applicable international law standard.”

Military judges are unbiased, officers on a jury panel have no connections to a case, and the military’s rules of evidence are based on civilian standards, he said. The Guantanamo Bay defendants will be allowed to cross-examine witnesses, and prosecutors will be required to prove their case beyond a reasonable doubt, Martins said.

For a death sentence to be imposed, as the U.S. seeks in the case, a jury of at least 12 officers must agree unanimously on the verdict, Martins said. The 80 percent conviction rate in courts martial from 1988 to 1993 is lower than that in civilian terrorism cases, he said.

“It’s not exactly identical to a criminal trial in federal civilian court, but in key respects it’s very close,” said Charles Dunlap, a retired Air Force Major General and visiting professor at the Duke University law school. “In any event, it more than meets international standards.”

It’s unclear what Mohammed and the others will seek from the proceedings. Glazier, a former Navy officer, said the least likely outcome is that they’ll mount a defense by attacking the evidence or the legal bases for the charges against them.

It’s more likely that they’ll seek martyrdom or use the trial to denounce the U.S., he said.

“He wants to stand up and take credit for what he did,” Davis said. “He’s proud of it.”